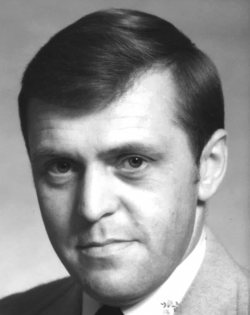 It is with great sadness we announce the passing of Floyd Wilbert Rushton, 78 years, of Amherst on Saturday, January 21, 2023 at Gable's Lodge, Amherst, NS.

Floyd was the very caring husband of Shirley (Brown) Rushton, Amherst, NS, and the loved and respected stepfather of Anita (Denis) Allen, Kitchener, ON; David (Sharon) Yorke, Welland, ON, and Alan (Tammy) Dupuis, Oxford, NS. He had three step-grandchildren, Alex, Kelsie and Kristin. Floyd was a kind brother to sister Marie (Robert) Young, Leamington, NS and a precious nephew to Martha Hoeg, Truro, NS. He will also be remembered by sister and brother-in-law Sharon and Cameron Scott, Niagara Falls, ON, and brothers-and sisters-in-law Robert and Joan Brown and Carlyle and Cindy Brown, Springhill, and brother and sister-in-law Charles and Patricia Brown, Enfield, NS and their families.

Born in Springhill, he was the son of the late Floyd "Tubby" and Elsie (Weirich) Rushton.

After graduating high school, Floyd joined the Royal Canadian Navy, 3 years; the Royal Canadian Mounted Police, 12 years; Correctional Service Canada, 20 years; and upon retirement the Canadian Corps of Commissionaires, 12 years. Floyd was meticulous in the jobs he performed and throughout his lifetime was recognized with many rewards for his accomplishments.

Floyd was a true gentleman who always said he lived his life by doing what, where and when he wanted. His favourite song was Louis Armstrong's "What a Wonderful World."

A sincere "thank you" to staff of Gables Lodge and the Cumberland Regional Health Care Centre for the excellent care given throughout his illness.

Arrangements are under the care and supervision of A .H. Brown Funeral Home, 5 McFarlane Street, Springhill, NS (902-597-2361). At Floyd's request, there will be no visitation or funeral service. He will be buried in Hillside Cemetery, Springhill, at a later date.

If so desired donations in Floyd's memory may be made to the L. A. Animal Shelter or The Alzheimer's Society.

Sharing of memories and condolences may be sent to the family by visiting Floyd's online memorial at www.brownsfuneralhome.com or through the A H Brown Funeral Home Facebook page.