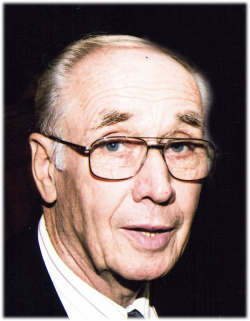 On his 94th birthday, October 7, 2022, Ivan Johnson passed away after a life well lived. He survived his wife Margaret's passing by only 139 days.

Ivan was born on October 7, 1928 to Anne (Davis) and Harold Johnson in the coal-mining town of Springhill, NS. It was a close-knit community where people looked after each other and helped where needed. Ivan enjoyed a childhood surrounded by neighbors that included grandparents, aunts, uncles, cousins, and friends. He enjoyed recounting stories of his childhood and teenage escapades.

In 1957, he married his beautiful wife Margaret (Bourque) and this began a 65 year old love story. In that same year, the couple followed the Maritime tradition of "going down the road" to find work in Toronto. He tried many jobs until he settled into one with Ontario Hydro where he spent most of his adult working life until retirement.

The decision to buy a home in Etobicoke led to living in a community that had the "small town values" Ivan had been searching for - caring, sharing, and helping where needed. These neighbors, and friends made through work, protected and cared for Marg and Ivan during illness and during the pandemic. Sheila and Mike Campbell, Gary Gillis, Brian and Susan Donnelly, and Vince and Natalie Mazzucco eased Marg and Ivan's last years and our family thanks you.

Ivan and Marg were a very social couple and loved to entertain, go to parties and dances, golfing and motor bike rallies. In retirement years, they enjoyed travel and cruises with their friends. Ivan's passion was motor bikes. It began in his youth with a WW1 surplus Harley Davidson with a suicide shifter, and culminated in 1990 with a Honda Goldwing which he rode into his 80's!

Marg embraced Ivan's motorbike passion and together they joined Motorcycle clubs such as the Retreads North America and the 40-Plus Club. As well as Sunday drives, they would attend club rallies and, for 24 consecutive years, attended the Lake George, New York rallies. Their last one was when Ivan was 83.

Until age and health prevented them, they would make annual trips to Nova Scotia to maintain their links to family and friends.

Not having children of their own, Ivan and Marg became a loving aunt and uncle and substitute grandparents to many family and friends.

They were loved by all and we will miss you.

Memories and condolences may be sent to the family by visiting Ivan's online memorial at www.brownsfuneralhome.com or through the A. H. Brown Funeral Home Facebook Page.