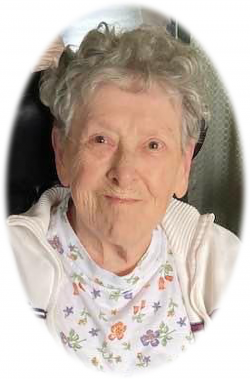 It is with deep sadness we announce the passing of our beloved mother, M. Marguerite Weatherbee, 88 years, of Springhill, on Tuesday, October 25, 2022 in the Cumberland Regional Health Care Centre. Born in Springhill, she was the daughter of the late James and Elizabeth (Melanson) Dujay.

Marguerite was a devoted member of Saint John The Baptist Catholic Church, Springhill.

Marguerite was a loving wife, mother, caregiver and occasional pirate. Her family was her number one priority. Her small stature belied her feisty nature. She was known and sometimes feared by school administrators, town officials, doctors, plow drivers and her daughters' boyfriends. She enjoyed puzzles and taking drives, loved horses, bird watching (in particular the hummingbirds) and knitting. She loved Halloween and the Christmas holidays.

She will be dearly missed by her daughters, Sharon Clarke, Connie (Alfred) Dwyer and Kathy Knowlton all of Springhill and Barby Weatherbee of Halifax; grandchildren, Bill (Wendy), Travis, Carrie and Kristen (Angie), as well as her great granddaughters, Julia (Abby), Chloe and Delia; a special friend, Barb Gallagher, and several nieces and nephews.

Besides her parents, she was predeceased by her husband, Melvin Weatherbee in 2013; her brothers, William, Garnet (late Theresa) and Ralph "Babe" (late Leta) Dujay; and a son-in-law, Bill Knowlton, as well as a special Angel, Helen, and her furry friend, Ginger.

The family would like to extend their sincere gratitude to the staff at Gable's Lodge, the nurses, doctors, and palliative care team at the Cumberland Regional Health Care Centre, as well as the VON for their incredible care and compassion. A special thank you to Carla Greene, NP for her kindness and care.

Arrangements have been entrusted to the care and direction of the A H Brown Funeral Home, 5 McFarlane Street, Springhill, (902 597 2361) from where a time of visitation will be held on Thursday, October 27, 2022 from 6-8 pm. A Funeral Mass will be held from St. John the Baptist Roman Catholic Church which will be led by a eulogy beginning on Friday at 12:50 pm. Father Charles Offer officiating.

Donations in Marguerite's memory may be made to Alzheimer's Society of Canada or a charity of the donor's choice.

Memories and condolences may be sent to the family by visiting Marguerite's online memorial at www.brownsfuneralhome.com or through the A. H. Brown Funeral Home Facebook Page.