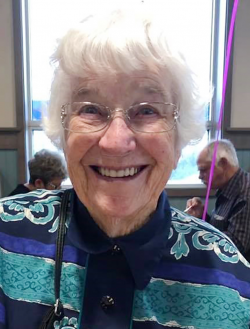 It is with great sadness we announce the passing of June Leita Jackson-Henwood, 101 years, of Springhill, on Thursday, August 4, 2022 in High Crest Nursing Home, Springhill. Born on June 29, 1921, in Amherst, she was a daughter of the late Leslie and Vira (Higgins) Doncaster.

June taught night school sewing classes for many years. She was also a seamstress for various clothing stores in Springhill and did dressmaking for others. She belonged to Cumberland Crafts; was a member of the Springhill Building Committee for a new Community Centre. She also served on the Springhill Police Commission and the Commission for providing work for Springhill students as well as teaching a class of sewing for neighbourhood children. She and her first husband Bill Jackson formed and operated the Springhill "Y" (youth) Group for many years.

June was a Sunday School teacher for 50 years and member of the United Baptist Church choir for 60 years. She enjoyed all sports and crafts and was well known for her quilt making. She was a member of the Springhill Seniors Club and three times its President. She received the Governor General of Nova Scotia Medal for Volunteer of the Year for Cumberland County in 1985. During a ceremony in 2019 June had the honour of officially opening the June Henwood Pit Pond Walking Trail, a trail around the local pit pond that June had invisioned many years ago.

Arrangements are under the care and direction of the A H Brown Funeral Home, 5 McFarlane Street, Springhill, (902 597 2361). A private graveside service will be held at the Hillside Cemetery at a later date.

Donations in June's memory made be made to the Springhill Baptist Church.

Sharing of memories and condolences may be sent to the family by visiting June's online memorial at www.brownsfuneralhome.com or through the A H Brown Funeral Home Facebook Page.