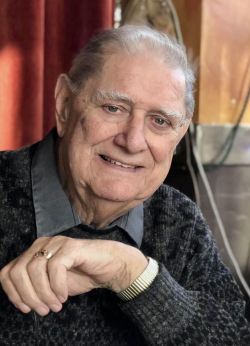 Howard "Howie" Bamford Spence Jr., of Springhill Nova Scotia passed away at the Cumberland Regional Hospital on July 10, 2022 after a serious blood infection. Born in 1936 to Howard and Helen Spence in Springhill, he was blessed with a second set of parents, Bill and Anna Webb, who raised him. Howie was brother to Anna, Nellie, June, Bodie, and Frank.

He began his teaching career in Springhill. He later became an audiologist and worked at the Amherst School for the Deaf.

He was active in civic affairs, including the Masons, Cumberland County Historical Association, and Cumberland County Hospice and Palliative Care Society. He was an active member of St. Andrew’s-Wesley United Church in Springhill, where he sang in the choir and served in leadership positions.

Howie traveled the world and told rich stories of his adventures. He loved to entertain family and friends, cooking multi-course meals and serving on a finely set table. He played cards and baked pies with equal joy and enthusiasm.

He was an uncle to many and a friend to all.

Howie is survived by his brother, Frank (Mary), Greenwood, NS, as well as many cousins, nieces, and nephews.

Howie felt that the Edith Piaf quote summed up his thoughts on his life and death: "I regret nothing!"

Arrangements are under the care and direction of the A H Brown Funeral Home, 5 McFarlane Street, Springhill, (902 597 2361).  Respecting Howie’s final wishes, there will be a simple graveside ceremony on July 29 at 10 am at the Hillside Cemetery in Springhill, followed by a reception held at St. Andrews Wesley United Church, Main Street, Springhill, all are welcome to attend.

Donations in memory of Howie may be made to the St. Andrew’s-Wesley United Church and the Cumberland County Hospice and Palliative Care Society.

Sharing of memories and condolences may be sent to Howie's family by visiting the online memorial at www.brownsfuneralhome.com or through the A H Brown Funeral Home Facebook Page.