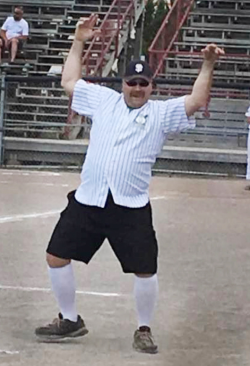 It is with great sadness we announce the passing of Carl Monston Porter Jr., 57 years of age, on Friday June 10, 2022, at the All Saints Hospital under Palliative care.

Carl was a loving husband, father, grandfather, coach and friend to many.

Besides his parents, Carl was predeceased by an infant son, Thomas Carl.

Carl’s life revolved around his family, especially his children. He was a gentle giant. He worked hard all of his life providing for his family. He was a kind, loving, caring, and supportive person. Carl loved being involved with hockey, baseball and softball. He coached several years of baseball for the Springhill Fencebusters, bringing home the Provincial banners in 2013 and 2014. You could always find him at the ball field playing or umping softball. Also just watching ball in the summer months. During the winter you could always find him at the rink watching his children and others from the community playing hockey. He would watch the Cumberland Blues and Amherst Ramblers with his side kick Alaina. Carl was a devoted fan of the Montreal Canadiens and Toronto Blue Jays.

Carl would travel PEI, New Brunswick, Nova Scotia, Vermont, and  wherever  else he had to take his two youngest children to play sports. An active community member, he was involved in many organizations over the years. Volunteering on the Blues Executive, The Springhill Fire Department, and Springhill Search and Rescue.

The family would like to thank Carla Greene, VON, the Palliative Care Team  (Beth, Brenna, and Dr. Short), Susan MacDonald, Jean Schiefer, Dr.Bob, 2nd Floor Nurses and Dr.Karivelli for being so helpful during this last leg of the wonderful life Carl lived

Carl’s wishes are that donations in his memory go to the Springhill Search and Rescue or Cumberland Palliative Care.

Arrangements are under the care and guidance of A.H. Brown Funeral Home, 5 McFarlane Street, Springhill, (902-597-2361).  Cremation has taken place. All are invited to attend an afternoon of remembrance for Carl at the funeral home on Sunday, June 19, 2022 from 2-4 pm.

“Did you have fun, that's all that matters”