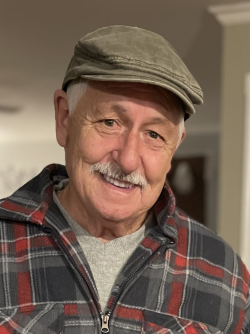 It is with sadness that we announce the passing of "Tuffy" Darrell Lawson Snell, 70, of Springhill, at the Cumberland Regional Health Care Centre on Monday, March 14, 2022 just a day shy of his 71st birthday.  Tuffy was born in Springhill, NS, a son of the late Walter and Amelia (Casey) Snell.

He had worked as an auto body man for 50 plus years and owned and operated Snells Auto body. Tuffy was a successful business owner and a hard worker, and was well respected in the community. Tuffy loved his old cars, especially going to car shows to show off his hot rods. He loved his fur kids Rosie and Casey.  He was known as Dr. Doolittle to his friends. Tuffy loved taking trips with his wife and friends and will be missed by many.

Besides his parents, Tuffy was predeceased by his step-son, Jamie Goodwin; his grandson, Kingsley Snell, and his siblings, Manzie, Fern, and Pic (Ruby)

Arrangements have been entrusted into the care and guidance of A.H. Brown Funeral Home, 5 McFarlane Street, Springhill, NS (902-597-2361).  Honouring Tuffy's wishes, cremation has taken place.  A Celebration of Tuffy's Life will be held from 1:30 to 4:00 pm on Thursday, June 2, 2022 from the Royal Canadian Legion, Springhill.  All are welcome to attend.

Donations in memory of Tuffy may be made to the LA Animal Shelter.