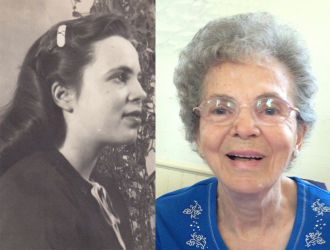 It is with great sadness we announce the passing of Shirley Alma Tabor, age 89, of Springhill, NS. Shirley passed away on Saturday, February 12th, 2022 at the Cumberland Regional Health Care Centre in Amherst, NS.

Born in Springhill, NS, she was a daughter of the late Muir and Alma (Babineau) MacKay.

Shirley was educated in the Springhill School system. She began her working years at Rushton's Groceteria and then later on worked at Sears Canada and the All Saints Hospital where she worked until her retirement.

Shirley taught herself to knit at age 7 and it was a life long passion to which most of Cumberland County can attest to as many people will have one of Shirley's creations. She loved crosswords, cooking, baking and was a master at cryptogram puzzles but above all else, she loved her family.

Shirley was an avid shopper and enjoyed going for drives and spending quality time at the beach.

Besides her parents, she was predeceased by her husband Jack, oldest daughter Louise who passed in an automobile accident in 1968 at age 15, nephews George McKay Jr at age 10 months old and Muir MacKay at age 13 as well as many aunts, uncles, cousins, sister-in-laws and brother-in-laws.

The family would like to take the opportunity to thank the staff at All Saints Springhill Hospital, the staff at Cumberland Regional Heath Care Centre especially Kelsey, Trish, Amanda, Shawn, and Sheila, the staff at Oncology Moncton and VON especially JeanieMaie Smith, for allowing Shirley to have 5 more months in her own home.

Arrangements have been entrusted into the care and supervision of A H Brown Funeral Home, 5 McFarlane Street, Springhill, (902 597 2361).  A Graveside Service will take place in Hillside Cemetery, Springhill, on Sunday, June 26, 2022 at 2:00 pm with Life Celebrant Scott Balser officiating. All are welcome to attend.

Donations in memory of Shirley may be made to the IWK Children's Foundation or charity of choice.

Sharing of memories and condolences may be sent to the family by visiting the online memorial at www.brownsfuneralhome.com or through the A H Brown Funeral Home Facebook Page.