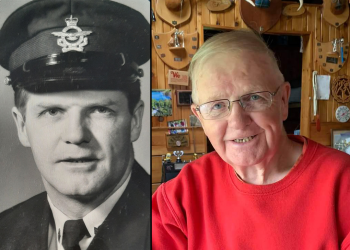 Darrell "Babs" Bernard Babineau, a proud Veteran of the Royal Canadian Air Force (RFAC), age 79, of Springhill, NS, passed away with his loving family by his side on January 4, 2022 at All Saints Hospital, Springhill.

Born in Springhill, he was the son of the late Garnet and Louise (Davis) Babineau.

At the age of 17, Babs enlisted in the Royal Canadian Air Force. He valued his service highly and attained the rank of Sergeant before retiring in 1983.  Soon after his retirement he worked for Correctional Services of Canada (CSC) for over 18 years.

Babs met Debby in 1964 and they were married in 1966.  The love they showed for one another was what some would call True Love.  Together they gave life to two beautiful daughters Robin and Crystal, making their circle of love complete.

Babs loved his sports, if he wasn’t playing on the team, he was coaching it. The Toronto Maple Leaf’s and the Toronto Blue Jays were his all-time favorite teams.  If anyone tried to say differently they would be guaranteed to receive a talking to, with some attitude to boot.

Fountain Lake was his second home and he considered everyone on Fountain Lake family.  The nearby kids would walk over to visit him, as he always had cookies and stories of his adventures at the camp.  Hunting season was his favorite of all seasons. In his earlier years, Babs would walk miles upon miles across the mountain.  His hunting buddies, young or old, couldn’t keep up with him.  He knew every square inch of the mountain and is the reason why he was called "The Mountain Man".

Darrell’s family would like to thank Dr. Ferguson and the nurses of All Saints Hospital. Also to everyone who sent their love, condolences,  pictures, stories, and food. Your kindness will never be forgotten.

Donations in memory of Babs can be made to the Lillian Allbon Animal Shelter, Marilyn & Friends Feral Cat Spay and Neuter Program or a Charity of your choosing.

Babs was a living legend.  He made many friends throughout his years of travels. He will be missed by everyone who had the privilege of meeting him and calling him their friend.