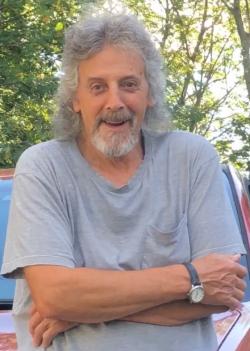 It is with deep sadness that we announce the passing of David Victor O'Reilly, age 65, of Springhill, NS. Dave passed away at the Halifax Infirmary on Sunday, April 11, 2021, while surrounded by his family.

Born in St. Lawrence, Newfoundland, he was a son of the late Albert and Theresa (Turpin) O'Reilly.

Dave loved a job well done. His brothers and sisters felt he was a gentle soul growing up, and joked that he was "the quiet O'Reilly". His brother Robert commented that 'nary a soul on this planet can speak ill of him'. A friendly man, he had countless acquaintances, and if you were his friend, you were his TRUE friend. He was a quiet and methodical man who was satisfied with his life and relished in the simple things. He gained great satisfaction in his carpentry endeavours and was surely and humbly proud of his accomplishments. Well read, thoughtful and well spoken, he was non-judgemental and was accepting of others as others accepted him and enjoyed his company. He cherished a good smoke.  Dave's words of advice to his daughters..."It pays to live, see you learn something new everyday; One thing you never really learn is how dumb you really are." Dave was a comical character who never squandered a day and may we forever be infected by his contagious, humorous, and compassionate disposition regarding life.

In addition to his parents, he was predeceased by his father-in-law Fred Ward; brother Albert; brothers-in-law Vince Ward, Richard Ward and Danny Ward.

Very special thanks for the extraordinary efforts and compassionate care to the CCU Nursing staff concerned with Dave's care, as well as all of the Doctors, Nurses and Respiratory Therapists who work in critical care.  Your skills, knowledge, commitment and care are truly incredible.

Arrangements are under the care and guidance of A H Brown Funeral Home, 5 McFarlane St., Springhill, NS (902-597-2361). Public Visitation will take place at the funeral home on Friday, April 23, 2021 from 6 to 8 pm. Invitation only Funeral Mass will take place at the St. John the Baptist Roman Catholic Church, Springhill, NS on Saturday, April 24, 2021 at 11 am, Father Charles Offor officiating. Masks are required, and it is asked that all follow Covid Regulations.

Donations in memory of Dave may be made to the Covenant House, Toronto, ON, or the charity of your choice.

Sharing of memories and condolences may be sent to Dave's family by visiting his online memorial at www.brownsfuneralhome.com or through the Brown's Funeral Home Facebook Page.