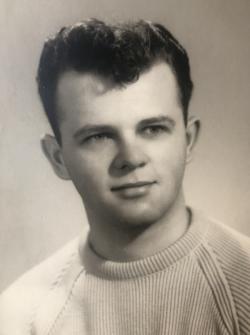 It is with deep sadness and broken hearts that we announce the passing of Paul Preston Merlin of Greenville Station, on Wednesday, April 7, 2021 at the Cumberland Regional Health Care Centre, Nappan.

Born in Springhill Nova Scotia. He was the son of Ruth G. (Brown) Merlin of Amherst and the late Carl P. Merlin.

He was predeceased by his father, Carl Merlin and his brother Charles "Chuck" Merlin.

Paul’s love of nature was evident at a young age when he use to skip school with his dear friend Bill Barrow, to fish and hunt in every corner of Nova Scotia. Paul achieved a degree in Biological Sciences from NAIT in 1971. He found his true passion working with fish at Seapool Fisheries, Clam Bay, NS. While working for the Department of Fisheries, as hatchery manager, Cardigan PEI, his dream to start his own fish farm became a reality. In 1973, Greenville Station, NS, Merlin Fish Farm Limited was born. Paul’s cumulative achievements led to Cape d’Or Sustainable Seafood Inc., the first land-based certified organic aquaculture facility in the world. His passion for aquaculture paved the road for numerous farmers throughout Atlantic Canada.  This pioneer was always willing to lend his expertise to the development of numerous land and ocean based farms. Paul’s tenacity and longevity created a blueprint and helped to establish stability within the industry.

Paul served as the President of the Aguaculture Association of Nova Scotia. He was awarded the Aguaculturist of the Year in 2009. Paul received numerous awards for his achievements in aquaculture and provided opportunities and employment to many people in our rural communities. Paul’s spirit is passed down through his children and grandchildren with their smiles, laughter, healing hugs and love of nature. Paul was a great friend to many and a soulmate to Gloria. He was a vision on the dance floor. Paul will be forever dreaming big, inspiring his friends and family to continue his legacy.

Arrangements are under the care and supervision of A. H. Brown Funeral Home, 5 McFarlane Street, Springhill (902-597-2361).  Cremation has taken place.  A Time of Remembrance will be held for Paul at a later date.

Donations in memory of Paul may be made to the charity of your choice.

Sharing of memories and condolences may be sent to Paul's family by visiting his online memorial at www.brownsfuneralhome.com or through the A. H. Brown Funeral Home Facebook Page.