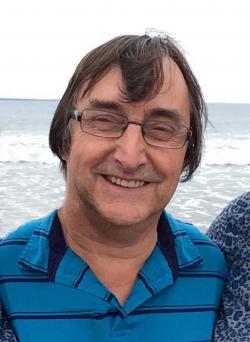 It is with great sadness that we announce the death of Roderick Andrew Bryan, 69, of Springhill, NS, at the Moncton Hospital on Sunday, October 4, 2020. Born in Springhill, Roddy was a son of the Late Douglas and Louise (Wheaton) Bryan.

Roddy enjoyed walking his best friend, Snoopy. He would often spend time downtown getting caught up on the local news. He enjoyed trips to Florida, was an avid sport card collector and die-hard fan of the Montreal Canadiens. Roddy was a proud and devoted member of The AA O'Rouke Group and the AA Junction Group, and with their support accomplished 39 years of sobriety.

He will be sadly missed by his wife of 44 years, the former Karen Calder; his children, Andrew, of Halifax, and Carrie (Earl Johnston) Bryan, of St. John's, NL; his sister, Grace (Brian) MacLeod, of Springhill and his brothers, Claude (Dorene) Bryan and Richard Bryan, all of Springhill; in addition he will be dearly missed by the grand-pups, whom he greatly enjoyed, Frankie and Wizard. He will also be missed by his brothers-in-law, Doug (Marlene) Calder, and Bill (Anne) Calder; his sisters-in-law, Doll (Jack) MacDonald, Charlene (Ken) MacCallum, and Sandra (David) Siddall, as well as several nieces and nephews.

Besides his parents, Roddy was predeceased by a brother, Wayne, a sister, Diane, and a brother-in-law, Murray.

Arrangements are under the care and direction of A.H. Brown Funeral Home, 5 McFarlane Street, Springhill, (902 597 2361). Cremation has taken place and a graveside service for Roddy will be held at the North Street Roman Catholic Cemetery on Friday, October 9, 2020 at 1 pm. All are welcome to attend. Please bring your masks and respect social distancing protocols.

Donations in memory of Roddy may be made to the LA Animal Shelter.

Sharing of memories and condolences may be sent to the family by visiting Roddy's online memorial at www.brownsfuneralhome.com or through the A H Brown Funeral Home Facebook Page.