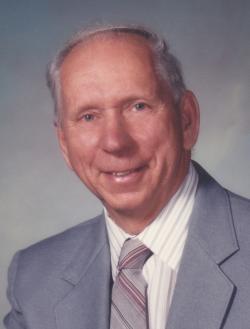 It is with great sadness we announce the peaceful passing of our dad, Arnold Leslie Young, 98 years of Leamington, on Saturday, June 27, 2020 in High Crest Nursing Home, Springhill. Born in Springhill, he was a son of the late James and Elizabeth (Churchill) Young.

Arnold was a veteran of World War II, serving with the Royal Canadian Air Force. During his early working years, he worked on the family farm and as a delivery man for the T. Eaton Company. He then worked with Corrections Canada beginning in Dorchester, NB, transferring to the Springhill Institution when it opened on February 1, 1967 as a Living Unit Officer until his retirement in 1982. He owned and operated A Young and Son Motorcycles for many years often sponsoring a rider on the local Motocross circuit. He was a member of the Springhill Senior Citizen's and Senior Bowling League; Cumberland Twirlers; Royal Canadian Legion Branch #17, Springhill for 58 years; life member of the Knights of Pythias Cumberland Lodge #5; and the Springhill Curling Club. He enjoyed sports, both participating and watching, especially curling. He mentored many young curlers with the Springhill Curling Club. In 1994 he was a member of the Royal Canadian Legion Branch #17 curling team skipped by Doug Dobson winning the right in Wolfville to represent the province of Nova Scotia at the Dominion Seniors Canadian Curling Championship held in Calgary. Arnold was very much a family man who loved his grandchildren unconditionally encouraging them every step of the way.

He was predeceased by his wife, the love of his life of 71 years, the former Eudora Legrow; brothers, Clyde who was listed as MIA during WW II and Wilmot; brothers in law, Emerson Smith and Arnold (Doris) Legrow.

Should friends desire, memorial contributions may be made to the Leamington Cemetery or charity of choice.

Online condolences and sharing of memories may be sent to the family by visiting Arnold's online memorial at www.brownsfuneralhome.com or through the A H Brown Funeral Home Facebook Page.