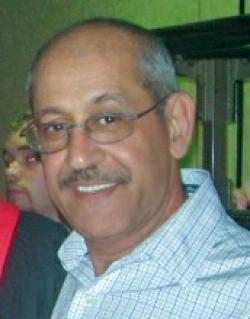 Early in the morning of May 1, 2020 Hilal Yacoub Wardian passed away after a brief illness. He was born in Bethlehem, Palestine.

His parents, Yacoub and Aisha, had a large family. He is survived by siblings Majid, Siham, Layla and Jehad; predeceased by brothers Ragi and Gazi and sister Suad.

Hilal had great memories of his life in Bethlehem. He was educated in the German School in Bethlehem and attended Collage in Jerusalem. He particularly enjoyed Christmas when the whole town joined in the celebrations, welcoming people from around the world.

Leaving Bethlehem was a difficult decision for Hilal. After a couple of years in Kuwait he decided to return home. Unfortunately, after the 1967 conflict with Israel, Palestinians living outside of Palestine were no longer permitted to return.

We met at the bank where he worked shortly after I arrived Kuwait in 1977. We had a great 2 years there, spending many happy hours with his sister Siham and her family. We were married there and returned to Canada in 1979.

Hilal worked in the vehicle export business for almost 40 years. We lived in Halifax, Ottawa and Yarmouth before settling in Springhill. It was a good decision for our family and Hilal made many friends, coached the local high school boys and girl’s soccer teams and dedicated himself to maintaining his fitness through bicycling, walking and shovelling snow on Morris Street. He considered his greatest accomplishment to be his children, Aiysha and Omar. He was a proud father, always reminding them of his roots but allowing them to follow their own path. They never had to wonder if he would be there for them.

You will be in my heart forever

This is the Muslim Holy Month of Ramadan. Hilal took comfort in that and reminded me that "this was a good time to die." It was his wish that there be no service.

Thank you to the VON and Palliative Care Team for all you did to allow Hilal to remain at home. A special thanks to Max Godfrey RN who was with us the day he passed.

Koda and Macy will miss you.

Donations may be made to the Springhill Salvation Army Springhill or Cumberland County Hospice Palliative Care Society.

Arrangements have been entrusted to A H Brown Funeral Home, Springhill, (902-597-2361), through whom memories and condolences may be sent to the family by visiting Hilal's online memorial at www.brownsfuneralhome.com or through the A.H. Brown Funeral Home Facebook Page.