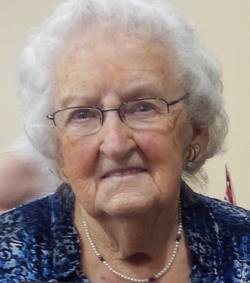 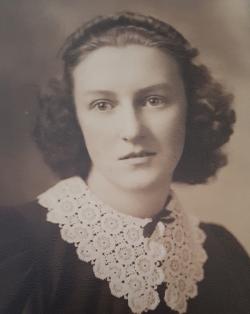 We are saddened to announce the death of our Mom, Helen Roberta Murray who died peacefully in the Dartmouth General Hospital on April 30, 2020.

Born on April 4, 1921 in Springhill, Nova Scotia, the daughter of the late Emily (Emma) Mae Foster and Hugh McSavaney, she was a teacher, friend, volunteer and dearly loved wife, mother, grandmother, sister and aunt.

Helen was educated in Springhill Schools, attending Grade 12 in Amherst. She is a graduate of the Provincial Normal College in Truro and taught in Windham Hill, Central Onslow and Springhill schools.

Helen was a member of St. Andrews United Church, Springhill  where she attended Sunday school, was a member of Junior and Senior choirs, leader of the Mission Band and Junior Guild. After her marriage, she became active in All Saints Anglican Church. She was a member of the Young People’s Group, taught Sunday School, assisted with the Ladies’ Guild and was Envelope Secretary for over thirty years.  She was a Life Member of Cobequid Chapter IODE, serving as regent, secretary, treasurer and convenor of most committees. She enjoyed attending provincial and national meetings of the Order.  She received recognition for 60 years of dedicated service in 2016. Helen was  an active member of All Saints Springhill Hospital Auxiliary receiving Volunteer of the Year in 2009, presented on behalf of the Province of Nova Scotia.

Helen enjoyed sewing, knitting, gardening, reading, word searches and, most of all, her family and her beloved grandchildren. She also liked watching Jeopardy, Wheel-of Fortune and, in season, curling. One of her greatest pleasures was spending summers at "the beach" in Port Howe with her sister Irene’s family and her own family.

She is survived by daughters Elizabeth (Bill) Harrison and Margaret (Don Cutcliffe) and grandchildren Ian (Mary Jo) Harrison, David (Amy) Harrison and Ryan, Lindsay and Amy Cutcliffe, brother-in law Jack MacEachern and several nieces and nephews. Helen will be dearly missed by family, friends and all those who knew her. We were blessed to have her as our role model, mentor and teacher. We are so much better as a result of her influence.

The family would like to extend a special thank you to Doris White for assisting Mom in her home, allowing her to maintain her independence, and taking her on long countryside drives that Mom valued so much.  Thanks also to neighbors Peter and Corina O’Brien who helped her maintain her house and property.  Thank you to those that ensured that Mom got to and from meetings, church  and community events. Because of you she remained active in the community despite her advanced age.

Arrangements are under the care and direction of A.H. Brown Funeral Home, 5 McFarlane Street, Springhill. (902-597-2361).  A Celebration of Life will be held at a later date officiated by the Rev. Dr. Brian Spence.   Burial will take place in Hillside Cemetery, Springhill.

In lieu of flowers, donations may be made to All Saints Anglican Church Hall,  Crohn’s & Colitis Canada  or a charity of your choice.

Sharing of memories and condolences may be sent to the family by visiting Helen's online memorial at www.brownsfuneralhome.com or through the A.H. Brown Funeral Home Facebook Page.