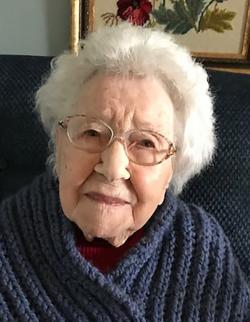 It is with sadness we announce the passing of Alice (Murray) (Gray) Guy 100 years, of Pugwash, formerly of Truro and Springhill, on Thursday, September 12, 2019 at the East Cumberland Lodge, Pugwash.

Born in Springhill, she was a daughter of the late Alexander C. and Jane A. (Young) Murray.

Alice became a widow in 1944 when her first husband was killed serving in the Second World War.  She raised her two children in Springhill until 1962 when she returned to College and attained her teacher's certificate.  She taught in Westphal and Halifax, then remarried in 1966 and lived in Truro.  After her second husband, Ralph Guy, retired, they spent a lot of time traveling the world visiting family.  In her later years, Alice provided loving care within her home for her husband and her daughter during their illnesses.

She will be missed by her son, Richard (Jean) Gray, Pugwash; brother, Kenneth Murray, Dartmouth; six grandchildren, Bert, Alex, Tracey, Hilary, Brian and Michael and 11 great grandchildren, as well as many nieces, nephews and cousins.

She was predeceased by her first husband Lemuel Gray and by her second husband, Ralph Guy; daughter, Beverley-Ann; siblings Clyde, Lloyd, John, Jim, and Susie Light.

Arrangements are under the care and direction of A H Brown Funeral Home, 5 McFarlane Street, Springhll, (902 597 2361).  A Graveside Committal Service will be held on Saturday, October 12, 2019 at 1:30 pm in the Hillside Cemetery, Springhill, with Rev. Glenn Matheson officiating, after which all are invited to the Funeral Home for a reception.

Those wishing to make a donation in Alice's memory may do so to the charity of choice.

Sharing of memories and condolences may be sent to the family by visiting Alice's online memorial at www.brownsfuneralhome.com or through the A H Brown Funeral Home Facebook Page.