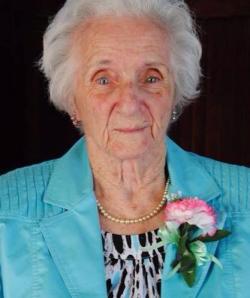 It is with great sadness that we announce the passing of Helen Marion Dill, 98, of Springhill, on Sunday June 30, 2019 at the Cumberland Regional Health Care Centre. Born in Springhill, Marion was a daughter of the late William and Greta (Tower) Reiley.

Marion had worked at MacAloney's Nursing Home before running Dill's Electric with her husband David. Before retirement, Marion operated her own flower shop in Springhill.

She was an active member of St. David's Presbyterian Church, and a member of the Presbyterian Ladies Guild. She was an active participant of the Nova Scotia Progressive Conservative Women's Association, as well as having sat on the executive for the Cumberland South Progressive Conservative Association. Marion was Past President of the Springhill Lioness Society, a member of the Springhill Duplicate Bridge Club, and delivered for Meals On Wheels well into her eighties.

Marion was a devoted mother and grandmother; her grandchildren were the light of her life.

Besides her parents, she was predeceased by her husband, David Dill; sisters, Phyllis LeBlanc, and Alfretta "Pat" Tristram; brother William Reiley, and grandsons Dwight Pashkoski, and William Black.

Arrangements are under the care and guidance of A.H. Brown Funeral Home, 5 McFarlane Street, Springhill, (902-597-2361) from where a time of visitation will be held on Friday, July 5, 2019 from 10 am until the funeral service at 11 am. Major Max Snow Presiding. Interment will take place in the Hillside Cemetery.

Donations in memory of Marion may be made to the Cumberland County Hospice.

Sharing of memories and condolences may be sent to the family by visiting Marion's online memorial at www.brownsfuneralhome.com or through the A.H. Brown Funeral Home Facebook Page.