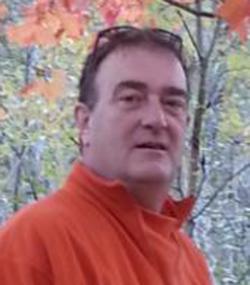 It is with profound sadness that the family of John Michael Findlay of Chignecto NS, share with you news of his death on June, 29,2019, at age 60. John was the son of the late Joseph Findlay and Marylou Kingan.

He worked as a custodian in various Cumberland County elementary schools and with NSCC Cumberland Campus for 30 years. John took pride in his work and was affectionately known to many as "Mr.Friendly". He had a strong respect for the preservation of our environment and was happiest when he was outdoors, snowmobiling, atving, fishing and gardening. He was a private person with a kind heart, a wonderful sense of humor and loved animals, especially his three dogs, Sabastian, Sundae and Lighting McQueen.

John is survived by his wife of 35 years, Ferne (Thompson). In addition to his mother, Marylou he is also survived by his brother Ron (April) and sister, Nadine; nephews Tim (Stacy) and Josh (Amanda); nieces Kandace (Michael) and Kamryn (Andrew); six grand nieces and nephews; his little buddy Lightning McQueen; and many wonderful friends.

He was predeceased by his father, Joseph Findlay and his father and mother-in-law, Seldon and Wilma Thompson.

Arrangements are under the care and guidance of A.H. Brown Funeral Home, 5 McFarlane St. Springhill, NS (902-597-2361) . In keeping with John's wishes, there will be a private family committal service. A Celebration of Life will be held at Sociables Pub, Springhill, on Sunday, July 14, 2019 from 4-6 p.m.

John fought a long hard battle with cancer and would be honored to know that those who wish to make memorial donations in his memory would do so to the Canadian Cancer Society or the Canadian Diabetes Association. We are grateful to those who cared for John during his illness, and for the friendships made. Appreciation is extended to VON Cumberland, the awesome nursing staff at All Saints Hospital in Springhill and the doctors, nurses and admin staff of the 4200 Oncology Unit at Moncton City Hospital.. A star in the sky has been named after him so he will always be watching over those he loved.

Sharing of memories and condolences may be sent to the family by visiting John's online memorial through the A H Brown Funeral Home Facebook Page, or at www.brownsfuneralhome.com.