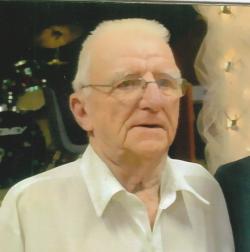 It is wilth sadness we announce the passing of Kenneth A. Mattix, aged 80 years of Amherst and formerly of Springhill, on Monday, November 4, 2019. Born in Springhill, he was a son of the late William and Phyllis (Rushton) Mattix.

During Ken's working years he was employed at a Saw Mill, in the local Coal Mines and in mixed farming.

Arrangements are under the care and direction of A H Brown Funeral Home, 5 McFarlane Street, Springhill, from where visitation will be held on Wednesday, November 6, 2019 from 6 to 8 pm . Funeral Service will be held 2:00 pm on Thursday, November 7, 2019 with Life Celebrant Scott Balser officiating. Burial to follow in West Brook Cemetery.

Those wishing to make a donation in Ken's memory, may do so to the Canadian Cancer Society.

Sharing of memories and condolences may be sent to the family by visiting Ken's online memorial at www.brownsfuneralhome.com